Minami (御波) is a character that appeared for the first time in Wadanohara and the Great Blue Sea -Reboot-. He is the son of Wadanohara and Samekichi.

Minami has short, messy dark blue green hair with two longer bangs at the front; raceless white skin and gray green eyes. He wears a sailor-inspired outfit, complete with a matching cap, suspenders, gray socks, and dark blue shoes. He carries a shark purse with him that resembles Samekichi. He possesses a youthful appearance, suggesting he is a young child.

It has been said that Minami's appearance is akin to his father's.

Not much is known about him, but he appears to have a cheerful personality. It has been said that Minami's personality is akin to his mother's.

He's also described as having a straightforward personality, and being an honest person. He has a bad sense of direction as well.

Not much is known about his past, other than he is the son of Wadanohara and Samekichi.

Being his mother, the two are close, and have often been seen together. The two possess similar hobbies and interest for birds. Minami is similar in personality with his mother. [2]

As his father, Minami has made several appearances alongside Samekichi as well as his mother, and it has been said that Minami's appearance is similar to his father's. [2] Samekichi appears to be a loving but worried father to Minami, telling him to not run ahead lest he get lost.

Minami and Memoca have been shown together in two headers and a Sunahama update from March 18th, 2017 that depicted Memoca perched on top of his head. It should also be noted that, excluding his father, Memoca is the only one of his mother's familiars he has been seen interacting with so far.

In a Bonus Scene in the Reboot, Minami meets Meikai one day while lost, trying to find his way back. Meikai walks and talks with Minami until he soon sees the castle up ahead. Meikai vanishes, and Samekichi shows up to bring Minami home. Minami is unaware of who Meikai actually was.

Namiho is Minami's Great Aunt. Though they have not been shown to have personally interacted, it is implied that he has gotten to see his Great Aunt, implied by a Bonus Scene in the Reboot. Namiho stated to Samekichi to bring Wadanohara and Minami around more so she could see their smiling faces.

Possibly his familiar, It is unknown what relationship do they have other than Killkill mentioning him by in a suggestive manner and wearing the same star symbol as him.

Possibly his familiar, It is unknown what relationship do they have.

Possibly his familiar, It is unknown what relationship do they have.

Possibly his familiar, Shisatsu makes a big ruckus when giving Minami a ride at super speed. 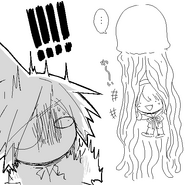 Retrieved from "https://okegom.fandom.com/wiki/Minami?oldid=60989"
Community content is available under CC-BY-SA unless otherwise noted.