Mikotsuhime/Princess Mikotsu (海骨姫) is one of the characters from Wadanohara and the Great Blue Sea. She is the ruler and creator of the Sea of Death and the sister of Uomihime.

Mikotsuhime's appearance is drastically different compared to her sister's, being dead-like and menacing. Mikotsu has long cobalt-gray hair, bangs styled in a hime cut and tied into twintails. She has red eyes; one eye, her left, is bandaged due to injury, an injury she suffered over the course of her war against the Blue Sea Kingdom. A prominent fang sticks down from the roof of her mouth. Her hands are bony fishtails, that radiate out from fleshy wrist stumps.

Mikotsuhime's obi is dark red, with a blood-red line in the middle of it, and a skeletal fish set in the front of the obi.

Before her uprising against the Blue Sea Kingdom and her creation of the Sea of Death, Mikotsuhime's appearance was different, although possessed many similarities to her appearance after the war. Her furisode was similarly blue in hue to her sister's furisode, and her obi had a white fish on it as opposed to a bony fish. The servant fish on her head was also a normal fish. Her hands were also fully fleshed and non-skeletal.

In the past, Mikotsuhime dearly loved her father, and was quite close with her sister. She was happier than her post-war self, seen cheerful and smiling. After Uomihime was designated as heir over her, Mikotsuhime changed; rather than celebrating her sister, she grew envious of her sister's power and sought to claim it. After the war, Mikotsuhime greatly changed.

Mikotsuhime is often quiet, typically having her servant Skeleton Fish verbally communicate with others. Little remains of Mikotsuhime's personality prior to her war campaign, with only vestigial traits persisting. She deeply hates her sister, her envy, rage, and malice towards her sister culminating into an explosive vendetta. Many years passed after their last battle, and Mikotsuhime maintained a obsession to destroy her sister and the rest of her denizens, willing to do anything in her power to destroy, such as corrupting a child. Her hatred and desire to end her sister's reign only grew during her imprisonment.

Even after losing her sanity and falling into madness, Mikotsuhime still dearly loves her father; in her prison, she cried out for her father in pain. Though she loves him, Mikotsuhime feels deeply betrayed by his decision to appoint Uomihime as his successor, crying out to her father in butchered speech, asking him why he chose Uomihime over her.

Uomihime is Mikotsuhime's sister, who she despises greatly. Mikotsuhime possesses great hatred for her sister, because she was chosen as ruler. Mikotsuhime, jealous and envious that Uomihime would become ruler over her, creates the Sea of Death in an attempt to wrest rule from her sister. While Mikotsuhime holds nothing but contempt for her sister, it appears that the feeling is not mutual for Uomihime.

Though Mikotsuhime hates her sister, they are still very close. In order to keep Mikotsuhime at bay, Uomihime fell into constant slumber herself, as her slumbering influenced Mikotsuhime to slumber as well. 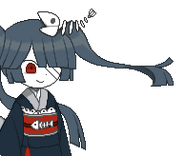 Mikotsu's dialogue portrait in Wadanohara and the Great Blue Sea.

Mikotsuhime in the aftermath of the war. 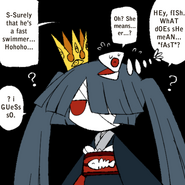 
Cite error: <ref> tags exist, but no <references/> tag was found
Retrieved from "https://okegom.fandom.com/wiki/Mikotsuhime?oldid=54372"
Community content is available under CC-BY-SA unless otherwise noted.