Mikari Katagiri (片桐みかり) is a character that has yet to formally appear in any series. She is a bookish human student and a cannibal.

She has fair skin, black hair tied up into two long messy braids and an ahoge, warm reddish orange eyes with skinny black oval pupils, and large round glasses. She also has sharp pointed teeth. She wears a school uniform which consists of a dark grey sleeveless sweater, a long-sleeved white dress under shirt, a light grey pleated skirt, white socks and brown loafers. She is often depicted carrying sawing tools covered with blood.

In an older picture, she had shorter braids and bangs. Her ahoge seemed to be longer, thinner, and more curly.

Mikari is a cannibal and appears to accidentally kill people. She's also quite the bookworm.[1]

Her only appearances up to this point were in some of Deep-Sea Prisoner's ilustrations and in a mini-comic. 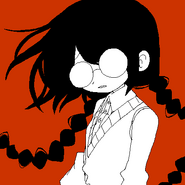 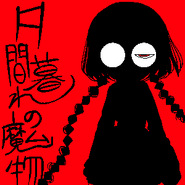 An evil spirit at dusk
Add a photo to this gallery

Retrieved from "https://okegom.fandom.com/wiki/Mikari_Katagiri?oldid=51327"
Community content is available under CC-BY-SA unless otherwise noted.