Mikaduki (朏) is one of the characters that has yet to officially appear in any series. She is a bear and Chlomaki's familiar.

Mikaduki's hair is gray, in a long hime cut. She has two gray bear ears in the top of her head, the right one having two gold ear piercings. Her eyes are blue and she wears glasses.

Like all of Chlomaki's familiars, her shirt is black, with eight, yellow buttons on the front, two yellow striped lines on either side of the buttons. Her shoulders are decorated with gold epaulettes The cuffs of her sleeves are a dark gray with gold buttons. Her skirt is also black with gray slits.

Mikaduki also wears dark gray tights, white gloves and long black boots with white laces, and unlike the others of Chlomaki's familiars, she has white claws where the toes should be. 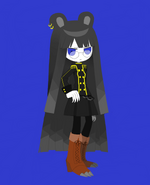 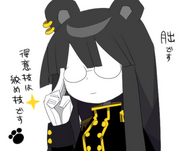 I’m Mikaduki. My specialty is the “tighten hold”

Retrieved from "https://okegom.fandom.com/wiki/Mikaduki?oldid=53823"
Community content is available under CC-BY-SA unless otherwise noted.