Meikai (溟海) is a wizard and a major character in Wadanohara and the Great Blue Sea. He is Wadanohara's presumably deceased father.

Being Wadanohara's father, he looks similar to her, with gray eyes and brown hair. He wears a pointed wizard hat with a darker navy strip and a light blue crescent moon and two stars as decorations. He has a large navy cape with a star pattern inside and a large necklace with teardrop and circle beads and crescent moon pin on his blazer above the necklace. Under the cape he wears a blazer with six buttons in two rows, trousers and dress shoes with a one large silver button on each shoe.

Meikai is shown to be calm, wise and mature, coolly dealing with the Sea of Death invasion. Like his daughter, he loves the sea dearly; his love is strong enough that he'd willingly sacrifice his life to seal away the kingdom's enemies. Though he died before he met his daughter, Meikai evidently held a fatherly love for her.

Meikai gave his life to seal Mikotsuhime and the other inhabitants of the Sea of Death away. Because of his death prior to the events of Wadanohara and the Great Blue Sea, Meikai's only appearances are in the form of references and memories of others. He does have a short appearance near the end of the game, where he councils Wadanohara. Prior to his disappreance, he had been given a choice by the Sea King to choose between his familiars as to who would possess the Sacred Sword, at the time that this was happening his former-familiar Old was listening in on the exchange. Meikai had drawn his decision and had picked Tatsumiya to be the one to wield the Sacred Sword, unfortunately the shark familiar was eavesdropping at the time and was upset at the wizard's choice; thus leading Old to betray Meikai and the Sea Kingdom.

In an extra video in the bonus room, he is seen prior to performing the spell to seal Mikotsuhime and her supporters to the Sea of Death, expressing a collected demeanor to his possible death by sacrifice.

Wadanohara is Meikai's beloved daughter. While Meikai disappeared before he could personally meet his daughter, he loved her dearly in his final moments of life. After his death, he became the Cast Pearl above the Sea King's palace, post-humously protecting the kingdom and in a way his daughter. He lent his power to Wadanohara by giving her his staff in order to save the Sea Kingdom, which was the only time they ever truly interacted with one another.

Tatsumiya was Meikai's trusted former familiar. Tatsumiya dearly loved Meikai, and grieved over him when he vanished. In place of her master, she took responsibility of caring for Wadanohara.

Old was Meikai's former familiar. Sometime in the past, Meikai had been given a choice to choose between his familiars as to who would wield the Sacred Sword, his ultimate choice was Tatsumiya which caused Old to defect from Meikai and join the Sea of Death's forces. Sheep has accused Meikai of allegedly "stealing" Old, what this is in reference to remains unknown. As of the 2017 10 21 update, Old is shown to have had romantic feelings towards Meikai; however, these feelings seem to have died off, and Old is shown to have a remorseful face.

The two had only been seen interacting once in a banner, this dates back to when Meikai had been much more younger and The Sea King was the current ruler of the sea. As of the 2017 10 21 update, The Sea King is shown to have faint one sided feelings towards a young Meikai, there are implications of a rather good bond as young Meikai shows pleasantry in the presence of the Sea King. Meikai had also been the one who had sealed one of the Sea King's daughter, Mikotsuhime, into the Sea of Death.

Also known as the Moon Spirit, Meikai met her on the surface and soon fell in love with her, sneaking off to see her every night. She was cursed by The Sea King when he became jealous about losing his precious friend, Meikai, who was later seen crying over her body.

In a Bonus Scene in the Reboot, Meikai is shown to make an appearance to Minami, who had gotten lost while running around. Meikai walks and talks with him along the way, until Minami can see the castle. Meikai disappears after that, and Samekichi finds Minami. Minami does not know who the friendly stranger truly was.

Samekichi is Meikai's son-in-law. The two have never personally met.

Satanick is revealed in a Bonus Scene of the Reboot to have been the one that created Meikai from a star; this light that fell onto the sea soon turned into a boy - Meikai. Not much else about their relationship has been revealed.

Meikai's dialogue portrait in Wadanohara and the Great Blue Sea.

◆Meikai papa: Wadanohara’s papa. He’s good at cooking and the piano.
Add a photo to this gallery 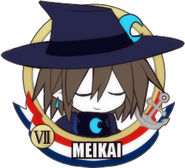 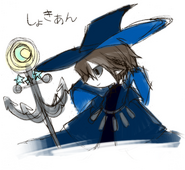 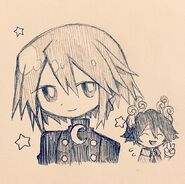 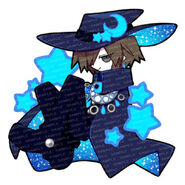 Retrieved from "https://okegom.fandom.com/wiki/Meikai?oldid=59975"
Community content is available under CC-BY-SA unless otherwise noted.