Medouco (メドゥコ) is a character from the same world that Obsolete Dream takes place in. She is a demon gorgon who works under Satanick.

Medouco's hair has pink streaks on top, with a black bow, and is full of white snakes with red mouths and eyes. She wears a black dress over what appears to be a white dress/shirt with a petticoat, and also black dress shoes with black ribbons. In an older picture, she is wearing a nurse's outfit with a pink belt, buttons, and stockings. Her eyes are uniquely composed of red sclera and yellow irises.

Not much is known about her, however, it can be seen in Deep-Sea Prisoner's comics featuring her that she is rather shy and quick to get embarrassed (especially over Satanick's harassment).

Not much is known about her, other than that she works for Satanick in some way.

Up to this point, Medouco has only appeared in some of Deep-Sea Prisoner's mini-comics and illustrations.

They seem to be close with each other. 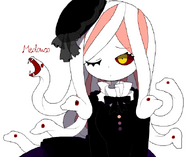 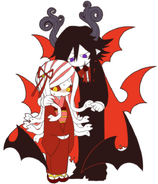 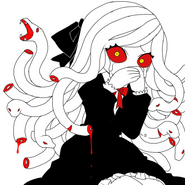 Retrieved from "https://okegom.fandom.com/wiki/Medouco?oldid=51354"
Community content is available under CC-BY-SA unless otherwise noted.