Mars (マールズ) is one of the characters that has yet to appear in anything. He is one of Elux's angels and Reficul's former work associate.

Mars has short beige gray hair with bangs. He has blue eyes, oval-shaped glasses, and he inhabits 3 pairs of small, detailed angel wings with a golden halo over his head. He has a white manager attire for women over a black shirt and a red neck tie. He also wears white pants and shoes as well as the standard marine belt. In addition, he has a long red cloth/ribbon behind his back.

Up to this day, Mars has only appeared in some of Deep-Sea Prisoner's Illustrations.

Prior to becoming a devil, Reficul was a comrade of Mars. 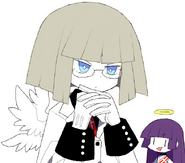 Retrieved from "https://okegom.fandom.com/wiki/Mars?oldid=53088"
Community content is available under CC-BY-SA unless otherwise noted.