Madhata (マドハタ) is a magician in Deep-Sea Prisoner's upcoming game, The End of the Wonderland.

Madhata has a monochrome color scheme, consisting only of shades of black and white. He wears a black formal suit with a top hat and carries a black cane, and his hair is messy with black and white streaks. His top hat is decorated with a large black striped ribbon, and he wears gloves. Madhata has eyes with black sclera and white irises.

In his older design, he had the same hairstyle, but with gray streaks instead. He had black sclera and blue irises. His top hat was black, decorated with a red ribbon, feathers and a piece of white card that wrote "10/13". He wore white office shirt with a green sleeveless jacket that has tuxedo tails, and a red ribbon on his neck. He also wore dark brown pants and black shoes. Instead of carrying a black cane, he held a teacup and a plate of biscuits.

Madhata is said to have a gentle personality.

Not much is known about him yet.

It is unknown what kind of relationship does the two have. 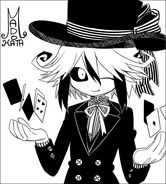 "Let's play cards!"
Add a photo to this gallery

Retrieved from "https://okegom.fandom.com/wiki/Madhata?oldid=50960"
Community content is available under CC-BY-SA unless otherwise noted.