Macarona has long, light brown hair; dark red eyes; and a pair of feathered wings. She wears a red and green sērā fuku; a green knife pleated skirt with red cross prints and a red stripe at the hem; a large ribbon; red argyle stockings with a white cross on her lower calves; and black Mary Jane shoes with a tiny, white cross on each side. She favors a Breton Sailor’s Cap in place of her angelic halo; and wields brass knuckles in battle.

Macarona is an incredibly timid and insecure angel; often asking for consent. She allegedly suffers from anxiety, and is seen fretting even in the tamest of moments. Macarona has several times admitted to being embarrassed of her dominant faintheartedness. Because of this, she exhibits an impressive will to improve herself. Macarona has a massively passionate side to her, and a constant eagerness to give others a hand. Though she is far from the bravest of angels, she has successfully come through for her friends on numerous occasions.

Beneath all her shyness and reluctance for the macabre and ghastly, Macarona can turn hostile to any who dare present a threat to those she cares about.

Macarona is an angel hailing from the Gray Garden who lives by herself in the Gray Village. She is a diligent student enrolling in the village’s school.

Etihw is the God who created Macarona, and is undoubtedly loyal and devoted to them. She worries about them during their disappearance, and is very much grateful and relieved to have them save her during the final clash against Ivlis.

She very much views him highly and is just as loyal to him as she is to Etihw; formally addressing him as “Mr. Kcalb”.

Though they are not particularly close, she holds him in high esteem. She is greatly concerned about him during his disappearance, and is recursively shrieking in both panic and terror when the girls find him and Grora severely injured in Blancblack Castle.

Macarona holds respect for Grora and calls her “Ms. Grora”. Grora acknowledges Macarona’s strength and is aware of her constant anxiousness. She has been seen encouraging the young angel regarding her prowess.

Rawberry is Macarona's best friend; they are considerably close. Macarona patently dislikes Rawberry’s quirks and fondness for bugs; absolutely hating the demon's many bug-themed dishes. Rawberry near-constantly teases Macarona regarding a great number of things (mostly bug-related), and has frequently made Macarona cry. Despite that, she is very forgiving, and does not take Rawberry’s treatment of her into heart.

Macarona has been invited for lunch and dinner by Rawberry together with her sister, Raspbel, and has also participated in a sleepover with her—albeit very reluctantly.

Yosafire is a close friend of Macarona. Yosafire visibly dislikes it when Macarona cries, and will do her best to comfort her friend in any way she can. She has been seen encouraging the angel to smile when situations turn for the worse.

Froze is a close friend of Macarona who worries about her. Froze has been seen reminding Macarona that she does not need to force herself into doing things that scare her.

When Froze is stabbed by Emalf, Macarona pales and cries at the sight. When Froze is subsequently pushed off the cliff they are on by the flame demon, for the first time in her life, Macarona snaps and retaliates with violent intentions; harshly beating Emalf and vehemently repeating her unwillingness to forgive him.

Once Macarona retains a much clearer state of mind, she is quite obviously thankful that Froze sustained no alarming injuries from the encounter.

Dialo is a good friend of Macarona; they are on good terms. However, Macarona seems to be insecure enough that she feels the need to ask for Dialo’s consent beforehand (e.g. when invited to eat apple pie at Dialo’s house).

Chelan is a good friend of Macarona; they are on good terms.

Macarona is fond of Raspbel; thinks of her as a good cook, and has complimented her cooking before. Raspbel very much encourages Macarona, and is disapproving of Rawberry’s josh to the angel.

Lowrie is one of Macarona’s teachers

Greif is one of Macarona's teachers.

Macarona harbors both resentment and fear toward Emalf for his ill deeds and violent attitude toward girls. But surprisingly, she finds Emalf’s eyes to be cute.

Macarona and Rigatona possess an uncanny resemblance to each other. It has been said that the two are related, although in what manner remains to be seen.

Macarona's dialogue portrait while wearing her disguise in The Gray Garden.

Macarona in the Flame Underworld

"I'M NOT HEARING YOUR EXCUSES!"

Macarona in an ending credits artwork.

The main TGG quartet in a Bonus Room picture

Pie time at Dialo's!
Add a photo to this gallery 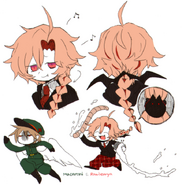 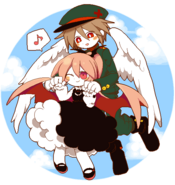 Rawberry and Macaroni
Add a photo to this gallery

Retrieved from "https://okegom.fandom.com/wiki/Macarona?oldid=56064"
Community content is available under CC-BY-SA unless otherwise noted.