Luno (ルーノ) is a character that has yet to formally appear in Deep-Sea Prisoner's series. He is a vampire and Iduberga's brother. He is said to be fairly off in the head and wants to kill himself.

Luno has white raceless skin, black and white hair with messy, four white ahoges coming from where his bangs start, two of which curl at the top like his mother's. He presumably has red eyes, one of them being covered by his bangs. He wears a black suit with a white dress shirt and a red bow around his neck, he also wears black dress shoes. He has a torn black cape with a red undertone.

From what is given, Luno is suicidal and a little 'off' in the head.

Up to this day, Luno has only appeared in some of Deep-Sea Prisoner's illustrations. 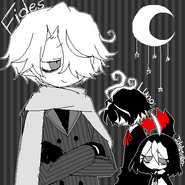 Retrieved from "https://okegom.fandom.com/wiki/Luno?oldid=50706"
Community content is available under CC-BY-SA unless otherwise noted.