Liliya (リリヤ) is a character that has yet to formally appear on any series. He is the god from Rosaliya Phantomrose's world and supposedly hurt her badly long ago, causing all of his subordinates to abandon him.

Liliya has blue gradient-like hair with two ahoges and turquoise eyes. He wears a blue military suit, white gloves, black shoes with blue green soles and a long blue sparkling cape with floral patterns. Also, he sports out a golden crown on the right side of his head. The fleur de lis pins on his shoes are of the same design as the one on his cape.

Liliya seems to be quite a vain jerk.

He is the god of Flower World. All of his subordinates abandoned him after he hurt Rosaliya Phantomrose (what he did to her has yet to be revealed). Anything other than that is unknown.

Up to this day, Liliya has only appeared in some of Deep-Sea Prisoner's illustrations.

Liliya made her cry once, which is the reason why all of his subordinates left him. 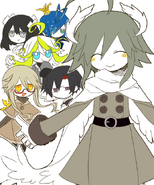 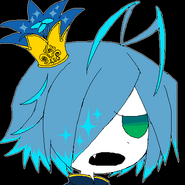 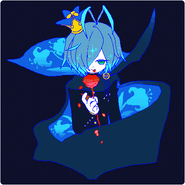 Retrieved from "https://okegom.fandom.com/wiki/Liliya?oldid=49902"
Community content is available under CC-BY-SA unless otherwise noted.