Lazward Starmarine (ラズワルド・スターマリン) is one of the characters that has yet to appear in any series. She is an Asian long-horned beetle. She seems to know Paprika and October October.

Lazward appears to have four arms, two on each side. She has dark blue eyes with long lower lashes and lighter blue hair with black-streaked ends. A pair of antennae grow from the top of her head, blue with black stripes. She wears a blue sailor uniform with six yellow buttons and two white accents on the collar with a white long-sleeved undershirt.

Up to this day, Lazward has only appeared in some of Deep-Sea Prisoner's Illustrations. 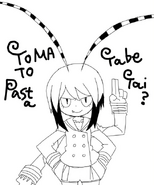 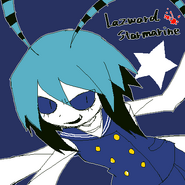 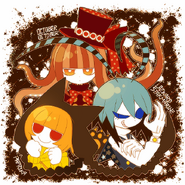 Retrieved from "https://okegom.fandom.com/wiki/Lazward_Starmarine?oldid=50691"
Community content is available under CC-BY-SA unless otherwise noted.