Lasafam (ラザファム) is one of the characters that has been said to be part of the Obsolete Dream world. He is one of Fumus' angels.

Lasafam appears to be a rather tall angel, possibly the tallest in Charlotte's squad. Like the rest of his squad, he has snow white hair with colored streaks in it, his color being red. His bangs cover one eye and curl at the end. The rest of his hair seems to curl outwards as well, aside from his ahoge. It should also be noted that he has a short pony tail held by a red ribbon. Like most Mogeko characters, he has raceless white skin. He wears a scarf in both the prevamp and revamp. His halo floats in the middle of his ahoge.

In his original artwork, he wore the same military uniform as Egmont, with a few subtle differences. The pants were less poofy, and the boots went to about mid-calf. And, of course, he wore his scarf. His wings were also more detailed and structured. He also held a white sniper rifle which may be a Dragunov SVD-63[1].

In his current artwork, he wears the same outfit as Egmont as well. Same sweater, same black slacks, same Oxfords. However, unlike Egmont, he leaves his shirt untucked, and substitutes his scarf for a tie. His wings are now puffier and softer-looking, and appear to be slightly tucked in towards his body when compared to the rest of his squad.

Not much is known, other than that he's apparently a brat.

Up to this day, Lasafam has only appeared in some of Deep-Sea Prisoner's Illustrations. 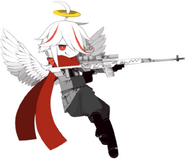 Lasafam's old design
Add a photo to this gallery

Retrieved from "https://okegom.fandom.com/wiki/Lasafam?oldid=50685"
Community content is available under CC-BY-SA unless otherwise noted.