Kras (クラース) is a character that has yet to appear in anything. Its implied in the Sunahama logs that she is one of Minami's familiars.

Kras has black spiky hair that is parted on the left and is held back in a low spiky ponytail, paper white skin and black eyes. She wears a bright crimson bandanna with black diamonds at the end around her neck, beneath it she wears a black leather zip-up jacket with a thin white stripe going down the arm. Her hands are covered by black leather gloves with what appears to be studded belts around them and possibly light brown pants.

Nothing is known about her past.

Up to this day, Kras has only appeared in some of Deep-Sea Prisoner's Illustrations.

It is unknown what relationship do they have. It is implied that she is one of his familiars. 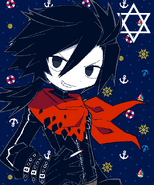 Retrieved from "https://okegom.fandom.com/wiki/Kras?oldid=45734"
Community content is available under CC-BY-SA unless otherwise noted.