Kogetsu (狐月) is a character that has yet to formally appear in any series. He is a fox.

Kogetsu is a white fox wearing a white Changshan with yellow lines. He also wear black pants and shoes that has a yellow button on the sides. He has red lining underneath his eyes. A visible fox tail could be found protruding from his hips.

Not much is known about his past, other than that he was in a romantic relationship with Eaudevie at some point.

Up to this day, Kogetsu has only appeared in some of Deep-Sea Prisioner's ilustrations.

Kumori and Kogetsu are possibly related in a way, since they were seen together in an artwork.

In the past, Eaudevie and Kogetsu were in a romantic relationship.

Brandy despises Kogetsu, not much else is know about their relationship. 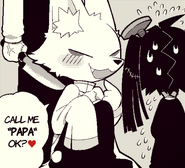 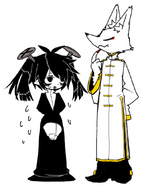 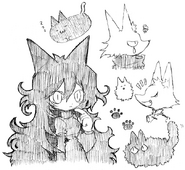 Retrieved from "https://okegom.fandom.com/wiki/Kogetsu?oldid=51338"
Community content is available under CC-BY-SA unless otherwise noted.