Kizuzaki (傷崎) is one of the characters that has yet to officially appear in any series. He may possibly be a mummy, though it is unknown at the moment.

Kizuzaki has dark gray hair that goes down to his neck with a curly ahoge coming out of the top. He has at least one light gray eye, as the other one can't be seen due to it being covered by a patch. His head and body is mostly covered in bandages. His left arm and right leg are both in casts and he wears grey socks with grey slippers on his left feet. His right finger can't be seen (even being unbandaged), suggesting that he is some kind of spirit.

Up to this day, Kizuzaki has only appeared in some of Deep-Sea Prisoner's Illustrations. 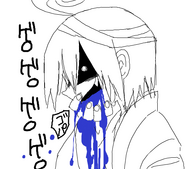 [barfing sounds] [cough]
Add a photo to this gallery

There are currently no known quotes from Kizuzaki.

Retrieved from "https://okegom.fandom.com/wiki/Kizuzaki?oldid=53770"
Community content is available under CC-BY-SA unless otherwise noted.