King mogeko looks like most normal Mogekos, although in some parts of the game he appears in he can be seen with one giant disturbing eye in the middle of his face- specifically when Defect Mogeko fails to kill him, and also in the "Happy End" where he talks madly about how Yonaka is stuck with him forever. It's notable that in some paintings throughout the castle, there's a Mogeko with a single eye; these paintings most likely depict King mogeko in his true state. In the painting behind his throne, he is seen with six golden flame-like wings, and a golden crown.

All Mogekos in the castle are mogeko's subordinates. They worship him as their king.

King mogeko's rival. Mogeko used to be friends with Defect Mogeko (when he was still referred to as "Nega-Mogeko"). He imprisoned Defect Mogeko with the excuse of him being a "defective Mogeko," after the latter tried to call him out for his actions.

Just like the other Mogekos, mogeko is madly in love with Yonaka.

Moge-ko is one of mogeko's subordinates. In the normal ending of the game, it is shown that even he fears Moge-ko getting angry at him.

King mogeko (plausible) telling a story to someone on bed. 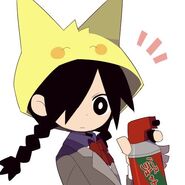 As hat
Add a photo to this gallery

Retrieved from "https://okegom.fandom.com/wiki/King_mogeko?oldid=55759"
Community content is available under CC-BY-SA unless otherwise noted.