Killkill (キルキル) is a character that has yet to appear in anything. It's implied in the Sunahama logs that he is one of Minami's familiars. He is a Jellyfish.

Killkill has paper white skin and his eyes are large and deep blue with swirls in them. His white hair goes past his hips and the longer strands appear to also be his tentacles. Another physical trait of note is his blue tongue. Killkill wears a light navy blue zip-up hoodie sweater that goes to his thighs with a white star emblem similar to Minami's symbol stitched into the hood.

Up to this day, Killkill has only appeared in some of Deep-Sea Prisoner's illustrations.

Possibly his familiar, it is unknown what type of relationship they have other than Killkill mentioning him by in a suggestive manner and wearing the same star symbol as him on his hood. 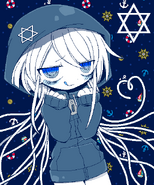 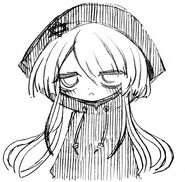 Retrieved from "https://okegom.fandom.com/wiki/Killkill?oldid=47419"
Community content is available under CC-BY-SA unless otherwise noted.