Malice has blue eyes and short blonde hair. She wears traditional Japanese clothing, which consists of a blue kimono, a darker blue hakama with a rose and two leaves embroidered on the right corner, a white apron-like garment over the hakama, brown laced boots, a blue yagasuri scarf, and a blue yagasuri hair ribbon.

Killice has long red hair, and yellow eyes. She wears traditional Japanese clothing like Malice, but has a red color scheme and the rose and leaves are printed on the left corner of the hakama. She also carries a long red and black sword. The swords hilt has a red heart on it and the sheath is surrounded by a coiling, thorny vine. The hilt and has a cross like design.

They're said to be something of split personalities, they seem to be opposites of one another.

The End of the Wonderland Cast 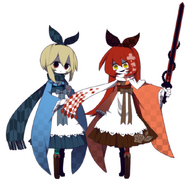 Rabbit blood is so tasty 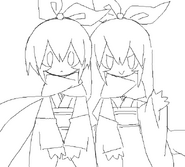 Retrieved from "https://okegom.fandom.com/wiki/Killice_Bloodless/Malice_Bloodless?oldid=50959"
Community content is available under CC-BY-SA unless otherwise noted.