Kiki (鬼黄) is one of the characters that has yet to appear in any series. He is an oni and Kiku and Kiheki's brother.

Kiki is a yellow skinned oni. His hair is white and short, with the two side bangs being longer. He wears a gray kimono, a black obi, dark gray tabi (socks) with black zōri which have gray thongs. He also wears a gakuran student cap with his horns sticking out of them. He wields a kanabō with three yellow eyes on it.

He is shown to be open-minded and does not like judging an individual based on what they are, but rather judging them on who they are. Hence, he believes that not all demons are the same and notorious.

Up to this day, Kiki has only appeared in some of Deep-Sea Prisoner's Illustrations.

Kiku is one of Kiki's sisters; they are close.

Kiheki is one of Kiki's sisters; they are close.

Kiki and Kiheki
Add a photo to this gallery 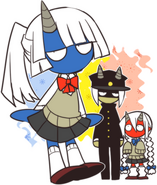 Retrieved from "https://okegom.fandom.com/wiki/Kiki?oldid=59535"
Community content is available under CC-BY-SA unless otherwise noted.