Kigisu is a character that has cameoed in the Wadanohara and the Great Blue Sea -Reboot- Bonus Scene 6. He is the king of the sky.

Satanick is revealed in a Bonus Scene of the Wadanohara Reboot to have been the one that created Kigisu as one of the three divine beasts to rule over the sky, alongside Artamos and Aounabara. Not much else about their relationship has been revealed. 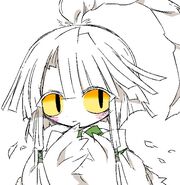 First appearance
Add a photo to this gallery

There are no known quotes from Kigisu

Retrieved from "https://okegom.fandom.com/wiki/Kigisu?oldid=59338"
Community content is available under CC-BY-SA unless otherwise noted.