Kagimori (鍵森) is a character that has yet to appear in anything. She is the lock and key witch and is currently missing from Deep-Sea Prisoner's character page. 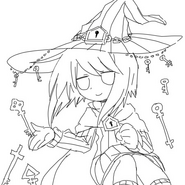 There are currently no known quotes by Kagimori.

Retrieved from "https://okegom.fandom.com/wiki/Kagimori?oldid=59039"
Community content is available under CC-BY-SA unless otherwise noted.