Kaen (火焔) is one of the characters that has yet to officially appear in any series. She is a fire witch.

Kaen has red eyes with black pupils and gray hair tied in pigtails. Her witch hat is red with an orange ribbon and two lit matchsticks tucked into it; the edges have a similar shape to fire. Kaen wears a black shirt with white cuffs and a high collared red dress over it, which also has flame-shaped edges.. She wears red leggings and dark red boots. Her broom is a torch with burning fire at the end, while having a small orange triangle "keychain" at the handle. She also has orange triangle shaped earrings, matching her broom-keychain.

Not much is known about her past yet.

In LOG-010, Kaen is seen having an allergic reaction from being around Hanahata, possibly because of her flowers.

Chlomaki has appeared in two images with Kaen. The two appear to be acquaintances.

Tetsuzora and Kaen were seen interacting in Wadanohara and the Great Blue Sea. They appear to be acquaintances.

Hoka and Kaen were seen together in one of Deep-Sea Prisoner's drawings. She is possibly Kaen's familiar, as Kaen's triangle symbol can be seen in certain artworks, as well as her name being fire-related.

Tokinome and Kaen has been seen together in a Halloween image. The two appear to be acquaintances. 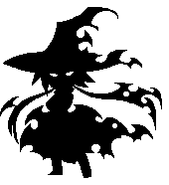 Kaen's cameo in Wadanohara and the Great Blue Sea.
Add a photo to this gallery 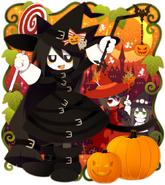 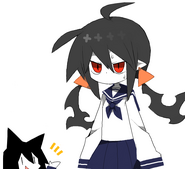 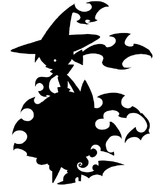 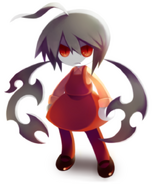 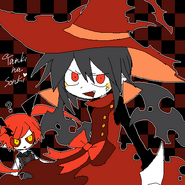 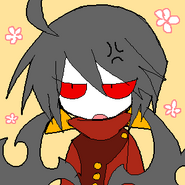 There are currently no known quotes from Kaen.

Retrieved from "https://okegom.fandom.com/wiki/Kaen?oldid=59391"
Community content is available under CC-BY-SA unless otherwise noted.