Jianshi has raceless skin, gray eyes with black slitted pupils, and messy medium-length black hair with random long strands. She wears an attire similar to that of a Jiangshi; which is composed of an iconic black hat adorned with red ribbons, a red high-necked dress with black accents, and a small dull-red cloth over long ruffled bloomers. The brim of her hat also has a yellow talisman attached to it. She has extremely long black nails and also wears a pair of black heeled shoes.

Up to this day, Jianshi has only appeared in some of Deep-Sea Prisoner's Illustrations and in a calendar.

Olie seems to be Jianshi's acquaintance. 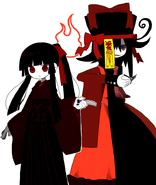 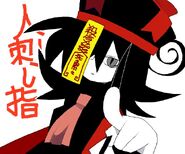 Pointer finger (The talisman on her face says "killing aura" and a slight wordplay on "pile of corpses.") 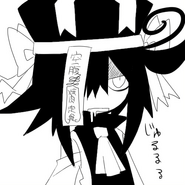 There are currently no known quotes from Jianshi.

Retrieved from "https://okegom.fandom.com/wiki/Jianshi?oldid=59509"
Community content is available under CC-BY-SA unless otherwise noted.