Isara (イサラ) is a character that has yet to formally appear in any series. She is at least half-vampire and Sirius and Apricot's half-sister.

Isara wears a winter sailor fuku over a white shirt with a red ribbon on her chest, white socks and brown school shoes with black soles. She has short brown hair with two antennae-like features sprouting on top of her head, pink eyes and raceless white skin.

Apricot is Isara's half-sister. It's been said the two are close. [1] 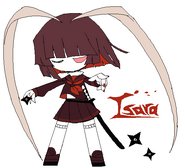 There are currently no known quotes from Isara.

Retrieved from "https://okegom.fandom.com/wiki/Isara?oldid=59095"
Community content is available under CC-BY-SA unless otherwise noted.