Irena has strawberry blonde hair with a heart-shaped mark on the right side, braided into two strands. Her bangs are layered and sideswept. She has golden yellow eyes with white pupils. She has a long mermaid tail which is the same color as her hair. She wears a fluffy dark red kimono.

Irena is shown to like naps and snacks. During a flashback in the game, Irena often sends Wadanohara on errands seeing as she can't walk on land (much to Samekichi's dislike). Her bio also states that she is very talented at singing.

Wadanohara is one of Irena's friends. Irena often asks her to do tasks.

Aom is one of Irena's friends. 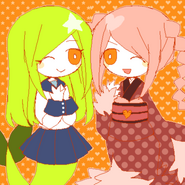 Retrieved from "https://okegom.fandom.com/wiki/Irena?oldid=54364"
Community content is available under CC-BY-SA unless otherwise noted.