Like all the other human characters, Imika has flesh-coloured skin. She has red swirling eyes and black irises. She also has red nail polish on. Her hair alternates between black and red, stripes of red dominating over the black of her hair. Her bangs and sidebangs have flat ends, and she has a black ahoge that is half red. She wears a white dress shirt and a red tie, underneath her long sleeved red sweater. She has a star ribbon on the right of her chest. She wears a gray pleated skirt, red stockings and black shoes, completing her high school girl attire.

Imika is a level-headed, unconcerned, and mysterious girl with flashy hair, which she insists is real.

Not much is known about her other than that she attends to the same school as Nataka Kurokawa and Tomoe Yahata.

Nataka is Imika's friend, classmate and crush. Imika's one-sided romantic feelings towards here were confirmed in the 2017 10 21 relationship charts update. They have been shown in many artworks together, one being where Imika surprises Nataka by sleeping next to her during presumably a sleepover.

Tomoe is Imika's classmate and friend. They don't speak to each other directly, but still hang around each other because of their friendship with Nataka. 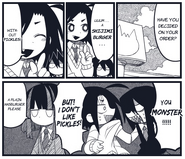 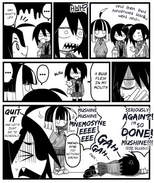 Imika: "Mnenosyne did nothing wrong."
Add a photo to this gallery 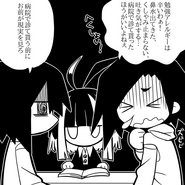 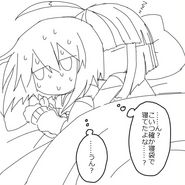 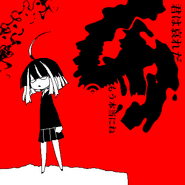 Retrieved from "https://okegom.fandom.com/wiki/Imika_Yuhjima?oldid=59858"
Community content is available under CC-BY-SA unless otherwise noted.