Igls Unth is an angel with long, wavy pale blonde hair and raceless white skin. Her eyes appear to be usually closed and emit rays of light capable of harming someone when opened. This would make her the fourth character with their eyes depicted as closed.

She wears an olive green military-esque uniform with gold buttons and accents; a black belt with a gold buckle around her waist; dark olive pinstripe stockings; black high-heeled thigh-high boots decorated with gold buttons; and black gloves. Her wings are large and feathery and gradient from orange at the top to the same hue of yellow as her hair at the wingtips. Her halo has a similar gradient effect and, unlike a normal halo, has a sunburst-esque shape.

She is deemed to be very loyal to Siralos, her loyalty running deep for her creator. She holds Siralos' actions and words in high esteem, rebuking her fellow creation, Ivlis, of his doubts over their creator's actions.

She was created by Siralos, alongside Ivlis. She currently resides on Siralos' side of the world.

Siralos is Igls' creator and father; she has deep faith in him and his decisions. Igls is often seen along side with Siralos in Deep Sea Prisoner's various artworks, usually accompanying him.

Their relationship is that of siblings, as they were both created and raised by Siralos. Despite this, Ivlis is considered the younger of the two. Unlike his hatred and rage for Siralos, he holds no visible grudges against Igls, and seems to possess no intentions to include her in his revenge against Siralos. In turn, it has also been stated that Igls was very saddened by Ivlis being cast out. [1] Before Ivlis was banished, the two were said to be very close.

Adauchi is Igls' nephew. One artwork depicts her chastising him for his disrespect towards Ivlis, demanding that he apologizes for calling him an airhead. 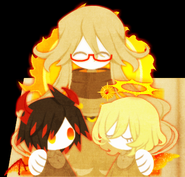 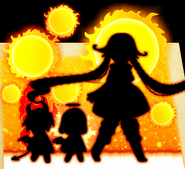 Igls attempts to quell Ivlis' doubts.
Add a photo to this gallery

◆Igls: Ivlis's big sister. She's very caring to her younger brother. Big boobs. An exceptional honor student and member of the kendo club. She can't stand cockroaches. If anything threatens her little brother, she will draw out two swords and mince them on the spot. She is popular with girls. "Ivliiiiis, always eat balanced meals, okay?" 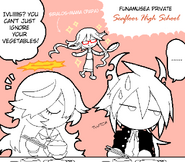 Igls Unth with her long swords 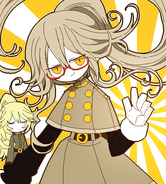 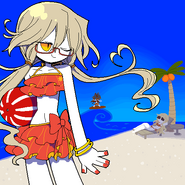 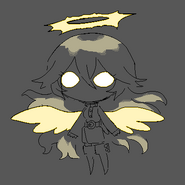 Retrieved from "https://okegom.fandom.com/wiki/Igls_Unth?oldid=59117"
Community content is available under CC-BY-SA unless otherwise noted.