If (イフ) is one of the characters that has appeared in Obsolete Dream related pictures. She is a human girl that was granted eternal youth.

If has fair skin, waist-length lavender hair in a Hime cut with parted bangs. Her eye color is purple. She wears a black long sleeved sailor seifuku with a white collar (the triangular neck piece is gray and has two white stripes), white bow, white gloves and white cuffs that have three black buttons on the side. She also wears a gray skirt with a darker gray lining near the hem and long black ombre boots that fade to brown with a small white bow on each lower side. She is often seen wielding a black hilted knife that fades to red on the end.

Her personality is not distinct; however she is apparently bad at cooking and dislikes Killisaki. She seems to be rather aloof and stubborn.

Up to this day, If has only appeared in some of Deep-Sea Prisoner's Illustrations.

Chlomaki and If seem to be relatively friendly, as demonstrated through If allowing Chlomaki to rest on her lap.

Elena has been drawn in artwork with If, their relationship remains unknown as of now.

If loathes Killisaki, as he only uses her as a bloodbag as well as insults her (terrible) cooking. There are implications of Killisaki harassing If by forcefully opening her clothes for easy access to drink blood. They are on bad terms. 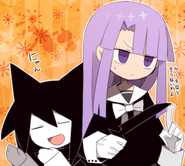 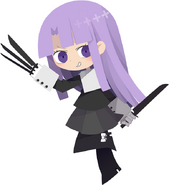 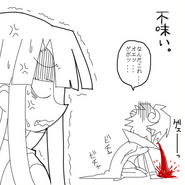 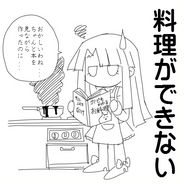 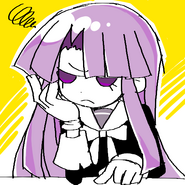 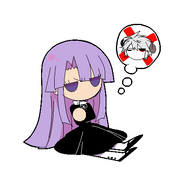 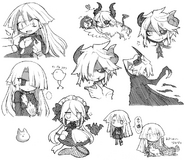 Retrieved from "https://okegom.fandom.com/wiki/If?oldid=51022"
Community content is available under CC-BY-SA unless otherwise noted.