Idate (イダテ) is a humanoid killer whale from Deep-Sea Prisoner's series, Ice Scream. He also made a minor appearance in Wadanohara and the Great Blue Sea known only as "Orca". He is the brother of Takama and the uncle of Nagi. 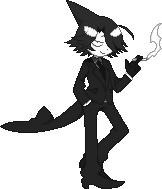 His skin is pale, and his sharp black eyes are often accompanied with a smirk, giving him a devious appearance. He has cropped black hair with two white eye-spots on both sides, giving him a more "orca-esque" appearance, along with a tall black dorsal fin on his head.

He wears a black business suit and a gray shirt, which is occasionally accompanied with a black tie (as seen in his Wadanohara and the Great Blue Sea sprites), but he is often shown without it in his Ice Scream appearances. He also wears a pair of black pants, gloves, and shoes.

He often is shown holding or smoking a cigarette.

In an illustration where he and his brother are depicted as being younger, he wore a black blazer with a gray sweater-vest, a white shirt, as well as a red tie.

Idate has shown a tendency to be cruel and sadistic with his actions, often referring to beating up others as "playing" with them. He also appears to be a heavy smoker. In his Wadanohara and the Great Blue Sea appearance, he is noticeably derogatory towards sharks, calling them "stupid" and "just fish." He even goes so far as to attack Samekichi unprovoked in hopes of eating him. In spite of his belligerence, he has been shown to be helpful, such as when he helped Tatsumiya escape at Wadanohara's request, although he claimed that he had nothing else to do.

In Ice Scream, he appears as the antagonist and often harasses the residents of Iceberg Isle, especially Rocma whom he appears to have a particularly unhealthy obsession with. He dismisses his niece, Nagi, as a mere child, and his elder brother Takama seems to disapprove of him.

Not much is known about Idate's past. He most likely came from the same city of orcas as his parents.

Nagi is Idate's niece. Nagi loves him a lot and uses a hyper respectful tone in addressing him, but she dislikes how he treats her like a child. In several illustrations, she is depicted carrying out violent and possessive acts towards Idate, and he is shown being in terror of her. Idate's obsession with Rocma often shortens the time they spend together, which Nagi dislikes.[1]

Takama is Idate's elder brother. They have yet to be seen interacting, but his elder brother seems to disapprove of him, even telling Nagi to keep away from him (as seen in Mogeko's LOG #1).

Rock detests Idate and the two of them have a violent relationship; nevertheless, Idate considers him "a true pal." Rock is a childhood friend of his, and they are smoking buddies. It has also been shown that Idate tends to talk a bunch about Rocma to him, much to Rock's obvious displeasure.

Rocma is one of Idate's enemies. She is the only resident of Iceberg Isle who dares to counter him. Idate has an unhealthy obsession with her, and various illustrations depict him thinking of or talking about her. It has been confirmed as of the 2017 10 22 update that Idate has one sided feelings towards Rocma.

Shirogane is Idate's torture victim. On two different occasions, Idate beat him with a stick and stabbed him with an icicle.

Yukisada is one of Idate's enemies. Idate tore off Yukisada's arm and tried to eat him.

Wadanohara is Idate's acquaintance. He attempted to eat her once as well, and he was even successful in one Bad Ending. Later in the game, he fulfilled her request to assist Tatsumiya, although he brushed it off as simply having nothing else to do.

Samekichi was Idate's one-time torture target. Idate targeted him on account of Samekichi being a shark.

Old was Idate's one-time torture target. Old was defeated quickly at his hands after a request from Wadanohara to help Tatsumiya. Like his son, Old was targeted on account of being a shark.

Tatsumiya is Idate's acquaintance. He assisted her in escaping from Old. A bonus scene in Wadanohara and the Great Blue Sea implies that Tatsumiya has a crush on him.

Idate and Seguro are acquaintances, seen to have met each other in the Bonus Room video "Love to Stroll" post-game. The two have a neutral relationship. Idate had first interacted with Seguro by inquiring as to where he found the underwater cigarettes, in which Seguro answers; the conversation between the two is brief and ends shortly.

Satanick and Idate share similar natures, as well as similar hobbies of sexual and violent natures. They are seen to get along rather well, seen drinking and eating out together in a friendly manner.

Gris possibly has romantic/sexual feelings for Idate, of which he does not reciprocate/feels uncomfortable by his presence and familiarity. Despite this, they are said to have a sexual relationship "somehow or other."

Retrieved from "https://okegom.fandom.com/wiki/Idate?oldid=66523"
Community content is available under CC-BY-SA unless otherwise noted.