Within the universe of Deep-Sea Prisoner's works, there are multiple unnamed human worlds. This was first strongly implied in Seaside Dispatches 2 and thereafter confirmed by DSP during a live stream in September of 2020. [1]

This is a placeholder name for the world that Yonaka Kuraui originates from. It would be safe to assume the locations of this world are - generally speaking - the same as our world as we do get to see glances thanks to Mogeko Castle and a calendar image that supports this idea. 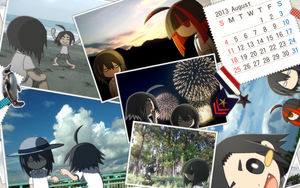 Yonaka Kurai and Shinya Kurai are students of this school. Torimi also wears the uniform for this school.

This is a placeholder name for the world that Victor Flankenstein used to live in, before it was destroyed by Fumus. A few minimal glimpses of this world were shown in Seaside Dispatches 2. It seems this world had 19th century technology.

Other human-related locations have also been shown in DSP's works that have yet to be confirmed to belong to specific worlds.

Retrieved from "https://okegom.fandom.com/wiki/Human_Worlds?oldid=59498"
Community content is available under CC-BY-SA unless otherwise noted.