Higan (悲岸) is one of the characters that has yet to appear in any series. She is a Demon/Angel hybrid.

Higan has raceless pale skin and red eyes with slit iris, she also has three pair of yellow eyes with red sclera, each respective pair having an eye on left and right side of hair on top of her head. She also has; long over flowing messy jet black hair that seems to cover her whole body. She has curved horns which are black just like her hair and a deviant halo, blood red in color floating right on top of her horns. Her black dress that can be distinguished has a red bow right below the collar, her body takes a spectral form making her dress and hair indistinguishable from her dress, giving it an abstract appearance. Her hands distinguishable from her remaining body are also pale in color, and her long sharp nails are dark red. Her body is abundantly covered with round, yellow eyes with a red outline and slit iris, her body leaves a small trail that appears to be similar to a demon tail in appearance. As seen in her image, she floats around despite having no feet.

Nothing much is known about her.

Not much is known about her past, other than knowing that she is a child of Daimonji and Cosmea.[1]

Up to this day, Higan has only appeared in some of Deep-Sea Prisoner's Illustrations.

Daimonji is Higan's father. They were once featured in a site banner together. According to a LOG image with her, they were somehow separated. 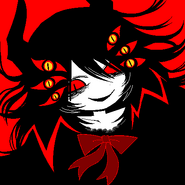 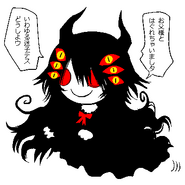 Somehow or other I got separated from my fatheR… i suppose i am what you would call a lost chilD. What should I dO 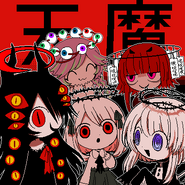 Retrieved from "https://okegom.fandom.com/wiki/Higan?oldid=52039"
Community content is available under CC-BY-SA unless otherwise noted.