Hidou (ヒドウ) is a character that has yet to formally appear in any series. He is Satanick's 7th subordinate.

Hidou has short, white messy hair, and ram-like horns on his head. He has red eyes slit black irises, and a black pointed tail. He wears a lab coat over a brown striped shirt. Additionally, he wears a pair of gray, circular glasses, and black gloves.

Hidou likes to capture and harass angels, along with a hobby of making snuff films with them. Based on a recent comic, Hidou seems to be rather nonchalant--uninterested with his surroundings even with a heavy storm taking place, and favors watching his videos instead.

Up to this day, Hidou has only appeared in some of Deep-Sea Prisoner's Illustrations.

The two have an unknown relationship. They appeared together in an illustration. 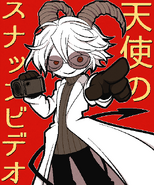 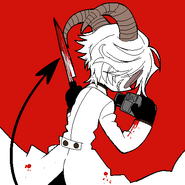 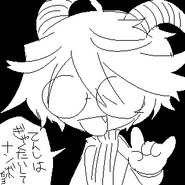 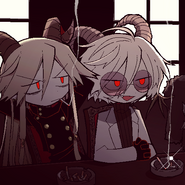 Retrieved from "https://okegom.fandom.com/wiki/Hidou?oldid=51793"
Community content is available under CC-BY-SA unless otherwise noted.