Hibuki (火吹) is one of the characters that has yet to appear in any series. He is a demon and Chishibuki's younger brother.

Hibuki has short, white hair, with side swept bangs, and simple, curved, black horns. He wears a black suit with a blue necktie and a cape that is black on the outside and blue with geometrical shapes on the inside. He also wears black heeled dress shoes and white gloves. He has a heart-shaped demon tail, similar to Chisibuki's. He is usually depicted manipulating blue flames.

From what can be seen in the artworks he is in, he seems to have a joyful personality.

Up to this day, Hibuki has only in some of Deep-Sea Prisoner's Illustrations. 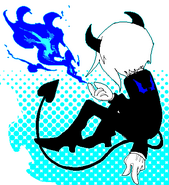 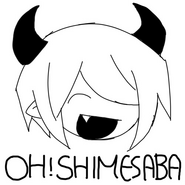 Oh! Salted mackeral!
Add a photo to this gallery

Retrieved from "https://okegom.fandom.com/wiki/Hibuki?oldid=50617"
Community content is available under CC-BY-SA unless otherwise noted.