Heller (ヘラー) is a character from the same world that Obsolete Dream takes place in. She is the mute leader of Hell's Yōkai.

Heller has long, straight black hair, raceless white skin and red eyes with black pupils. She wears a bluish-gray coat, a red shirt with a big black dripping pattern on it, bluish-gray pants with gray linings on the side, black socks and red slippers. She also wears black-rimmed glasses and is usually depicted possessing crimson and black energy spheres.

She can sometimes be seen wearing a dark grey yukata with a bright red nagajuban, black obi, bright red obijime, her hair loosely tied up with a red and white hair accessory in a low ponytail.

Not much is known about her personality other than the fact that she is mute.

Up to this day, Heller has only appeared in some of Deep-Sea Prisoner's Illustrations.

They seemingly know each other.

Heller has one sided feelings towards Satanick as seen in the 2017 10 21 update where an arrow is shown pointing to Satanick; however these feelings are not reciprocated and Satanick is shown to be uncomfortable. This could possibly be because of Satanick's relations with her father, Gokuen. 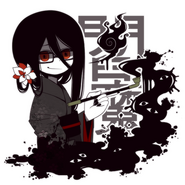 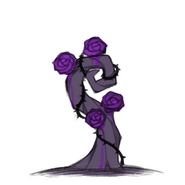 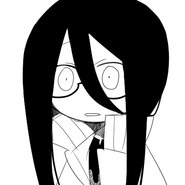 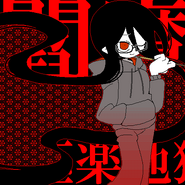 Retrieved from "https://okegom.fandom.com/wiki/Heller?oldid=50180"
Community content is available under CC-BY-SA unless otherwise noted.