Hakuchu (白昼) is one of the characters that has yet to appear in any series.

Hakuchu has fair skin, black hair, and eyes. He wears a gakuran uniform which consists of a black coat with mandarin collar, five golden/yellow buttons worn over a white shirt, black trousers and black dress shoes.

Hakuchu is described as being kind and quiet, along with being a yandere.

Up to this day, Hakuchu has only appeared in some of Deep-Sea Prisoner's illustrations. 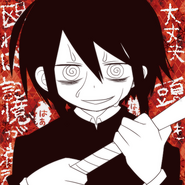 It’s okay, a smack the head will take care of that memory…
Add a photo to this gallery

Retrieved from "https://okegom.fandom.com/wiki/Hakuchu?oldid=52156"
Community content is available under CC-BY-SA unless otherwise noted.