Gris is a whale with an obsession for Idate, they have yet to appear in any series.

They have been said to be quite a confident person, not caring if Idate likes a girl, because they never doubt for a second that Idate will become theirs in the end. They also appear to be the obsessive type, as indicated by their behavior towards Idate.

Not much is known about them, other than their love-fueled obsession with Idate, to the point where Gris proposes to him "on a regular basis."

Up to this day, Gris has only appeared in some of Deep-Sea Prisoner's illustrations.

Gris possibly has romantic/sexual feelings for Idate of which he does not reciprocate. Idate feels uncomfortable by their presence and their overly-friendly behavior. They show up together again in Sunahama 2017 11 28 'I date' on a date with a not-so-happy Idate, and shown a second time possibly proposing to him, much to Idate's discomfort. They are said to have a sexual relationship "somehow or other." 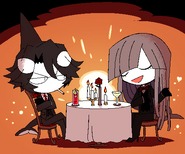 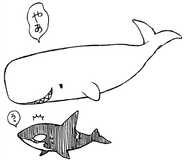 Retrieved from "https://okegom.fandom.com/wiki/Gris?oldid=52525"
Community content is available under CC-BY-SA unless otherwise noted.