The Great Witch (大魔女; previously known as Daimajo) is the head of the witches and a minor character in Wadanohara and the Great Blue Sea. She is the one who oversees the Witch World.

The Great Witch has raceless white skin and jet-black eyes with dark circles. Like other witches, she wears a large witch hat and cloak. Her cloak is a dark brown with a red interior, fastened with a button, and her hat is wide brimmed with a red interior, similar to her cloak. Her hair is jet black with her long bangs that reach down to her nose - the length of her hair reaching down to her hips. She is often portrayed with a large three-eyed, three-legged crow sitting on a swirled, wood staff.

In her portrait art, a white feather with black along the top edge of it is also seen; the reason for this is unknown at this time.

She is cold, stubborn, and quite wise.

Evident by her name, she appears to be quite powerful. possessing a respectable title and status. As overseer of the Witch World, she appears to have power over the witches residing there, many of whom are also similarly powerful.

Chlomaki is one of the Great Witch's fellow witches.

Wadanohara is the Great Witch's acquaintance and fellow witch, introduced to each other by Chlomaki.

Syokamori seems to be the Great Witch's assistant.

Shiroma is one of the Great Witch's fellow witches.

Tuchikure is one of the Great Witch's fellow witches.

The Great Witch's dialogue sprite in Wadanohara and the Great Blue Sea.

The Great Witch's silhouette in Wadanohara and the Great Blue Sea. 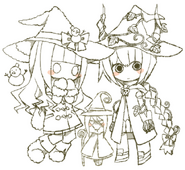 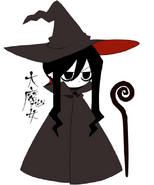 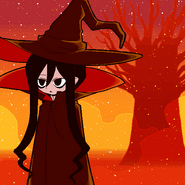 Retrieved from "https://okegom.fandom.com/wiki/Great_Witch?oldid=57162"
Community content is available under CC-BY-SA unless otherwise noted.