Great Star Wizard is a character that has yet to formally appear in any series.

The Great Star Wizard has long black hair and an ahoge. His eyes are gold and have circles in them. His shoulders are adorned by a long black cape. The outer layer of said cape is black, while the inner is night-sky dark blue. Furthermore, he wears a dark robe with many details. The garment has long sleeves with golden triangles at the end. His robe is also decorated with golden pendants.

As for jewelry, he wears a golden star necklace around his neck and wears vertical golden earrings. In regards to hair decorations, above his head floats a type of halo, but it has no hole. Instead his halo consists of multiple gold circles that get progressively smaller, similar to the pattern in his eyes.

Not much is known about his personality; though, judging from his appearances in Skeb commissions, he seems friendly.

Not much is known about his background.

Up to this day, the Great Star Wizard has only appeared in some of Deep-Sea Prisoner's Illustrations, including 3 Skeb commissions.

The two are close. And though it seems that they are not related by blood, the tenma once refers to the Great Star Wizard as "mother". 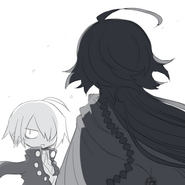 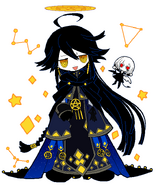 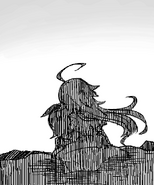 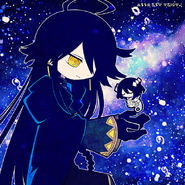 Retrieved from "https://okegom.fandom.com/wiki/Great_Star_Wizard?oldid=58784"
Community content is available under CC-BY-SA unless otherwise noted.