Gimone (ギモネ) is a character that has yet to formally appear in Deep-Sea Prisoner's creations. It is implied that she is related to Rinet in some way.[1] She also may have ties to Kurokawa, as an old picture in the logs suggests.

Gimone is a pink cat with fair skin and red eyes. She has light pink shoulder length hair with the same colored cat ears on top with white interior, as well as a cat tail of the same color. It is seen that her fringe covers her left eye. She wears a faded green sweater, dark brown stockings (?), and thigh-high boots. She also carries an Épée type fencing sword. Also, she has a four leaf clover as an accessory on the left side of her hair as well as on each side of her boots.

She doesn't seem to express her emotions, as seen in some of Deep-Sea Prisoner's artworks featuring her. Not much is known about her other than that.

Up to this day, Gimone has only appeared in some of Deep-Sea Prisoner's Illustrations.

Kurokawa may be somehow related to Gimone. 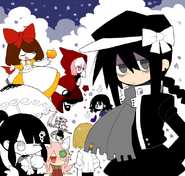 In the mold skies, clouds melt 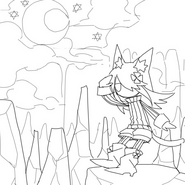 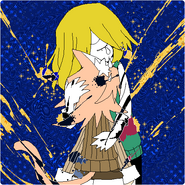 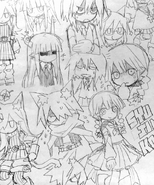 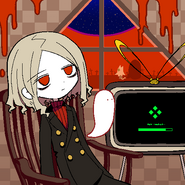 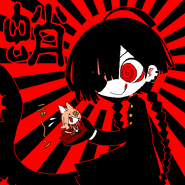 Retrieved from "https://okegom.fandom.com/wiki/Gimone?oldid=51116"
Community content is available under CC-BY-SA unless otherwise noted.