Emalf (エマルフ) is a demon from the Flame World in The Gray Garden. He is one of Ivlis' underlings, and one of the antagonists of the game.

He wears a high collar black and red jacket with a flame patterns, a gray shirt, black and red pants with a flame pattern that seem to sagging while held up by a dark gray belt with a silver flame shaped buckle and black shoes with red soles. He also has multiple accessories; sunglasses which hide his amber-colored eyes; gold rings on his fore, middle, and pinky fingers; gold piercings on his ears, wings, horns, tongue, and tail; a short chain that is attached to his pants; a spiked choker and a necklace resembling with a pendant that resembles a bat.

Emalf is cocky, ranting about his 'ultimate familiar' and how it's going to kill Yosafire and her friends, only to find out that it was killed by Ater and Arbus. He's also brutally violent, attempting to stab Yosafire in the back, stabbing Froze in the gut and then pushing her off of a cliff. Though cocky and violent, he is also quite cowardly, having run away more than once when faced with overwhelming opposition. He expresses misogynistic views.

He and Adauchi were close friends and may possibly still be.

Yosafire is one of Emalf's enemies and his love interest, though the romantic feelings aren't reciprocated. He has a crush on her, but she hates his guts and insults him on sight. Her nicknames for him are "Shades McGee" and "Pervy McShades", on account of his creepy flirting and penchant for wearing shades.

Ivlis is Emalf's Devil, who he serves during the invasion of the Gray Garden. Even though Ivlis is his devil, Emalf believes he is an airhead, a view shared by many.

Poemi is Emalf's fellow demon, both of them serving directly under Ivlis. They seem to be on good terms considering he hangs out with her the most out of the other flame demons, even if she does pick on him.

Rieta is Emalf's fellow underling. They don't appear to be on bad terms, Emalf expressing concern when she's stuffed into a lamp by Reficul.

The two met briefly when Reficul visited the Flame World. Reficul doesn't hold him with any particular view, squashing him and beating him up with ease, in order to get to Ivlis.

Adauchi is Emalf's friend. They're stated to be "close friends" by Deep Sea Prisoner and used to go to karaoke a lot together. As of the 2017 10 21 update, Emalf is shown to have faint feelings towards Adauchi; however these feelings appear to be not reciprocated.

Monster in the Darkness

The monster was Emalf's familiar, prior to their death by the hands of Ater and Arbus. They were kept in a cage by Emalf, and were able to be teleported by their master whenever and wherever Emalf needed them. Thought to be quite powerful and strong enough to demolish Yosafire and company by Emalf, Emalf confidently boasted that they were his "ultimate familiar" in The Gray Garden.

Emalf appears as one of the bosses in The Gray Garden. Throughout the game, the player battles him twice.

Emalf's dialogue portrait without his shades in The Gray Garden. 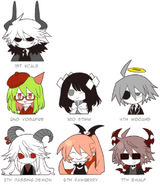 The results of a TGG favorite character survey, with Emalf ranking 7th 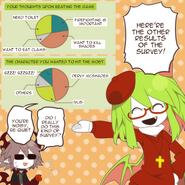 Burned. (Translated by seichiinara)
Add a photo to this gallery

◆Emalf: He’s both Adauchi’s closest friend and childhood friend. Living the dorm life. Room right next to Adauchi’s. After stalking Yosafire, he got his picture exposed in the school newspaper and suffered extreme embarrassment. “Please, just not my sunglasses! Stop!”
Add a photo to this gallery 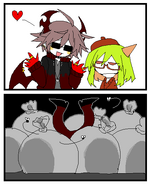 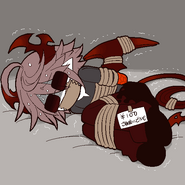 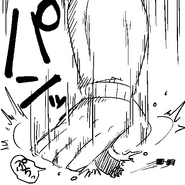 Retrieved from "https://okegom.fandom.com/wiki/Emalf?oldid=55950"
Community content is available under CC-BY-SA unless otherwise noted.