Elux (エルクス) is a character from the same world that Reficul is from. They are the god of their world and Reficul's enemy.

Elux, in their feminine form, has cyan eyes and white skin. Their hair is very curly and has two tones, white and a yellowish lime-green, and appears to end on their waist. It is also seen that they have a curled ahoge sticking out on their head. They wear an oversized gray coat with ten dark gray buttons, standard marine belt, gray stockings, and black boots with crosses on each side. A large ribbon is tied to their back, which sticks out at the front.

In their masculine form, Elux has the same hairstyle, though it ends near their chin. They retain most of their outfit, but instead of stockings they wear gray pants with crosses on each side, and black shoes. It is shown they wear white gloves and the oversized coat now has a capelet.

Deep-Sea Prisoner has stated that Elux is egotistical. [1] Not much else is known about their personality.

Up to this day, Elux has only appeared in some of Deep-Sea Prisoner's illustrations.

She is the devil to their world and was an ex-subordinate of them. Deep-Sea prisoner has stated that Reficul and Elux are 'enemies, obsessed with each other'. [1]

Sol is Elux's angel and creation.

Mercury is Elux's angel and creation.

Mars is Elux's angel and creation.

Luna is Elux's angel and creation. 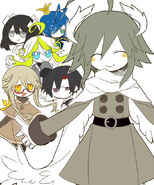 Elux, locked up with the gods.
Add a photo to this gallery

Retrieved from "https://okegom.fandom.com/wiki/Elux?oldid=57058"
Community content is available under CC-BY-SA unless otherwise noted.