Elena(エレナ) is a character that has yet to appear in anything. She appears to be a demon, most likely from the Pitch Black World.

Elena has long Malibu blonde hair that reaches just below her waist, with messy side swept bangs and dark brown ribbed horns that curve upwards. She also has gray sclera and neon green eyes and gray pupils, with neon green nail polish. She wears a striped brown turtleneck dress with black and white striped sleeves that have white cuffs and three brown buttons, a black belt with a gold belt buckle and a pair of brown folded boots where the top is a lighter shade of brown and has three dark brown buttons on the sides.

Elena is most likely shy and flustered at most times. Not much else is known about her.

Up to this day, Elena has only appeared in some of Deep-Sea Prisoner's Illustrations.

Their relationship is currently unknown; they were seen together in an illustration.

Their relationship is currently unknown; they were seen together in an illustration. 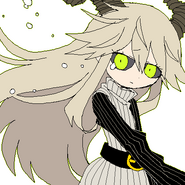 Retrieved from "https://okegom.fandom.com/wiki/Elena?oldid=50588"
Community content is available under CC-BY-SA unless otherwise noted.