Egmont (エグモント) is one of the characters that has been said to be part of the Obsolete Dream world. He is one of Fumus' angels.

Egmont appears to be somewhat tall, appearing to be almost as tall as Lasafam. He has shoulder-length snow white hair with green streaks in his bangs. He also appears to have a small green bow in his hair. Like most Mogeko characters, he has raceless white skin. His eyes, in both designs, are perpetually closed. Egmont, wears a light grey sweater with a white dress shirt and green tie underneath, with black slacks and Oxfords. His wings appear more to be soft and fluffy. His color theme revolves around spring green.

Before Mogeko revamped the designs of Fumus' angels, Egmont wore a black and gray military-esque uniform, with a gray jacket over a darker gray dress shirt and black tie. He also wore black knee-high boots over puffy grey pants. His wings were more structured and detailed, his proportions were noticeably different, and the green in his color scheme was darker.

Not much is known about him, other than he is said to be a model student.

Up to this day, Egmont has only appeared in some of Deep-Sea Prisoner's Illustrations. 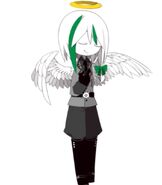 Egmont's old design
Add a photo to this gallery

Retrieved from "https://okegom.fandom.com/wiki/Egmont?oldid=50586"
Community content is available under CC-BY-SA unless otherwise noted.