Dolpi (ドルピー) is a humanoid Dolphin from Wadanohara and the Great Blue Sea. She is one of Wadanohara's current familiars.

Dolpi has short, dark grey hair cut into a bob style; her dorsal fin protrudes from the top of her head and is somewhat small. She has black sclera with white pupils and a dolphin tail matching her hair color.

She wears a dark blue sleeveless sailor like dress reaching around hip length, with dark blue cuffs. The pocket edge, collar, the edges of the cuffs and bottom of the dress are accented with white stripes. The dress has six, golden buttons on the front and two matching buttons on each cuff. Dolphi wears white stockings and black buckle up shoes.

Although scared of sharks and other scary things, Dolpi is normally nice and quiet. She loves to draw like Memoca, but Memoca constantly scares her for fun. She is easily startled and grossed out. It is shown she sometimes speaks childish, simplistic sentences that can occasionally be grammatically incorrect. Often times these sentences only use one, two, or three words. However, despite her timid and fragile personality, when something she cares about is being threatened (i.e the sea, Wadanohara, etc.) she acts very angrily and doesn't seem fearful. In the manga of Wadanohara and The Great Blue Sea, she is seen chasing Memoca with an axe, which could mean she has some kind of disorder .

Nothing much has been known about Dolpi's past.

Memoca is Dolpi's friend and a fellow familiar of Wadanohara. Memoca enjoys teasing and scaring Dolpi for fun; these shenanigans are usually put to an end by Fukami or Wadanohara. In the manga, Dolpi chased Memoca with an ax for teasing her too much.

Fukami is Dolpi's friend and a fellow familiar of Wadanohara.

Samekichi is Dolpi's fellow familiar of Wadanohara. Dolpi was extremely frightened of him for the first half of the game.

Dolpi's dialogue sprite in Wadanohara and the Great Blue Sea. 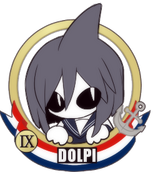 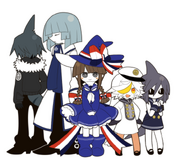 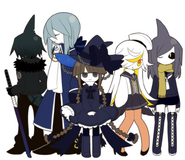 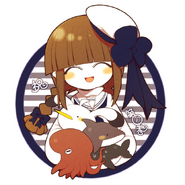 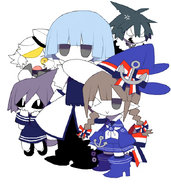 Retrieved from "https://okegom.fandom.com/wiki/Dolpi?oldid=52837"
Community content is available under CC-BY-SA unless otherwise noted.