Dokugai (毒害（ドクガイ)) is a character that has yet to appear in any series. He is Satanick's 10th subordinate.

Dokugai has white skin, black, messy hair, and red eyes; his fingers appear to have stitches on them as well. He wears a black robe, with two buttons on the collar and five buttons on the left side of the torso. He wears a belt with a plague doctor-like mask hanging from it, and pointed, black shoes with studs on them. He also wears fingerless gloves and many rings across all ten of his fingers. He's also shown to have various piercings on his body.

In the original character sheet, Dokugai had the character code 0307.[1] However as of now, he is currently unassigned. 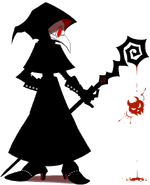 Retrieved from "https://okegom.fandom.com/wiki/Dokugai?oldid=50581"
Community content is available under CC-BY-SA unless otherwise noted.