Dialo (ディアロ) is one of the main characters of The Gray Garden. She is a female demon and Chelan's best friend.

Dialo has bright red hair tied in two pigtails. Her eyes are black. She wears a black and red dress with a scalloped edge as well as white stockings and black Mary Jane's that have bat wings. Dialo wears a white capelet with a turtleneck that has a scalloped edge and a black ribbon with a skull ornament. The cuffs on her dress are white on the outside and red on the inside, and also have a scalloped edge. Dialo's wings are black on the outside and red on the inside. Her horns and tail are black, but become red at the ends.

Dialo is a great cook and is great at making apple pie, but her style of making apple pie is quite forceful. This is implied after Yosafire and Froze brought the collected apples to her.

She is a resident of Gray Garden, who lives in Gray Village and is a student from Gray Village School. She is a close friend to Chelan and lives with her.

Chelan is one of Dialo's friends. Among the main characters, Chelan is closest to her. The two make apple pies together often.

Froze is one of Dialo's friends.

Lowrie is one of Dialo's teachers.

Greif is one of Dialo's teachers.

Etihw is one of Dialo's friends. They are seemingly in a good relationship.

Dialo and Lost possess an uncanny resemblance to each other. It has been said that the two are related, although in what manner remains to be seen.

A photo during the credits with Dialo in it. 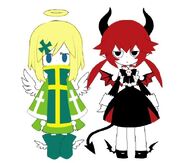 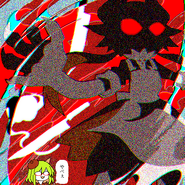 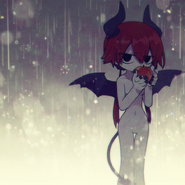 Retrieved from "https://okegom.fandom.com/wiki/Dialo?oldid=56065"
Community content is available under CC-BY-SA unless otherwise noted.