Defect Mogeko looks like a green Mogeko, with an X-shaped scar on his torso and a scar on the right side of his face. He is also missing his left ear and tail.

He used to get along with King Mogeko but came into disagreement with him, being branded as a "defect Mogeko," and subsequently imprisoned.

He is considered to be a "defect" by the Mogekos, although there isn't anything defective about him save for deviations from the rest of the Mogekos.

As far as his actual personality, Defect Mogeko is relatively tough but calm, contrasting Yonaka's more emotional reactions to the events throughout the game. He can also be resourceful, thinking to bring a weapon (more specifically, a rocket launcher) from the hospital in the case of an emergency, and even having tear gas to stave off King Mogeko during his and Yonaka's rush to the seventh floor of the castle. He is also unfazed if any harm comes to himself, and is more concerned with protecting Yonaka and getting her out of the castle, showing a selfless side to him. While he claims he helped Yonaka since he had nothing better to do, his actions show him having a certain kindness.

After he told King Mogeko that his way was wrong, King Mogeko called Nega-Mogeko "defective" and imprisoned him. According to Defect Mogeko himself, he gave up fighting after he lost his ear.

Yonaka is Defect Mogeko's one-off acquaintance. She was helped by him in order to escape Mogeko Castle.

The two were friends.

Defect Mogeko, in his last moments before executed

I can't carry my bucket of cuteness here.

Defect Mogeko in the "Last Supper" scene in the Bonus Room 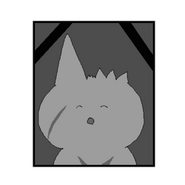 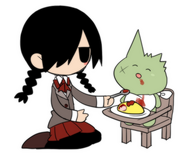 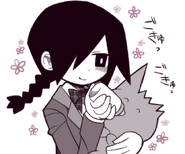 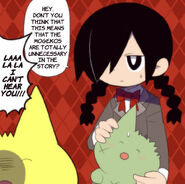 Yonaka:"Hey, don't you think that this means that the mogekos are totally unnecessary in the story?" Mogeko: "LAAA LA LA I CAN"T HEAR YOU!!!" 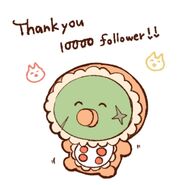 A thank you for 10,000 followers on Instagram!
Add a photo to this gallery

Retrieved from "https://okegom.fandom.com/wiki/Defect_Mogeko?oldid=57389"
Community content is available under CC-BY-SA unless otherwise noted.