Deep-Sea Prisoner (海底囚人, Katei Shuujin), commonly shortened to DSP, is a Japanese indie artist and game developer formerly known as Mogeko. She is well-known for creating games such as The Gray Garden and Wadanohara and the Great Blue Sea. She's a talented person working to create various games, comics, and other stories through various forms of media.

Deep-Sea Prisoner has an official website, a Twitter, an Instagram, and a YouTube account. She can also be found on a multitude of other websites these days, with various new projects she is working on: Linktree . She used to have a Tumblr blog, but has since deleted it due to certain circumstances.

Deep-Sea Prisoner has stated that she no longer wishes to be called "Mogeko," as the name has developed a negative connotation and is associated with her fictional characters, "Mogeko," who are depicted as rapists.

Furthermore, even though her official alias is Deep-Sea Prisoner, she has stated that she likes being called "Funa," but thinks "Funamu" is even cuter. [1]

The Creative Process and Environment

Deep-Sea Prisoner draws with a tablet pen. Most of the situations in her works - when they happen, and what feelings they’re meant to invoke - and materials are planned in a single notebook or memos, that are used while working. The order is:

Upon creating a story, she particularly focusses on the relationship between characters - who hates who and who likes who.[2]

Deep-Sea Prisoner has also said that, with the exceptions of humans and some other groups, everyone in their creations is bisexual (unless stated otherwise) and that ideas such as gender and age are left as an afterthought in the creative process. [3]  She has also said that several of her characters are "without gender, or somewhere in the middle, so it’s pointless to even think about it." [3]

Deep-Sea Prisoner's creations, especially Wadanohara and the Great Blue Sea, have received fairly positive reception overseas. Deep-Sea Prisoner says she's glad for the response from abroad and that she was surprised at first, but things like being kindly sent drawings and being able to receive thoughts and impressions make her very happy. [2]

The best way to contact her is through email or her Twitter. She is very approachable and friendly to her fans. Deep-Sea Prisoner knows a minimal amount of English, so do not be afraid to attempt and approach her with simple English. Additionally, Deep Sea Prisoner says that when she receives something in a language that she doesn't understand, she makes good use of translation sites. [2]

Deep-Sea Prisoner has a variety of ways in which fans can support her, one main way being that of Ci-en - where people can get access to exclusive content and behind-the-scenes of certain projects she is working on before they are released. Another method is through Booth, where she sells her merchandise, alongside Alice Books, Amazon, and Suzuri. Deep-Sea Prisoner has also started dabbling in the world of Live2D, and she has begun selling her creations on Nizima.

Further details about ordering a Live2D model from DSP can be found on her blog in the custom order guidelines.

Below is a list of current Vtubers that have bought from her designs: 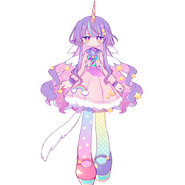 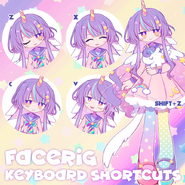 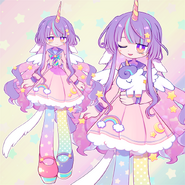 In the summer of 2014, Deep-Sea Prisoner was harassed by Tumblr users in regards to a fan-requested drawing posted on her Tumblr depicting one of her characters, Syakesan, sexually assaulting another character, Wadanohara. Deep-Sea Prisoner deleted her Tumblr blog in response to the reaction. This would lead to her adopting new policies in regards to the sharing of her content. [4] She (temporarily) restricted the usage of her games to be for private usage, with live streams and playthroughs of her games being forbidden. This ban has since been lifted.

Retrieved from "https://okegom.fandom.com/wiki/Deep-Sea_Prisoner?oldid=69138"
Community content is available under CC-BY-SA unless otherwise noted.