Daimonji (大門字) is a demon and used to work for Lil with Anten and Maekami. Little is known about him. He also made a cameo in Wadanohara and the Great Blue Sea -Reboot-.

Daimonji has short white hair with much longer bangs on one left side, fair skin, pointed ears and a pointed canine tooth. He wears a neon green visor goggle. He also wears a black scarf with a worn out appearance and a button down grey sweater with a white shirt underneath, black pants and a pair of matching black shoes. He has simple, curved black horns. He has a black skeletal demon tail that looks similar to a spine in appearance.

Not much is known about him. He seems to love Cosmea.

It appears that Daimonji used to work for Lil as her subordinate, alongside with Anten and Maekami.

Seemingly, he had lost his lover a long time ago and was depressed ever since.

Higan is Daimonji's daughter. They were once seen together in a banner.

In the past, Tsurugigozen did something to hurt Daimonji. It is unknown what he did to him. 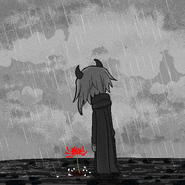 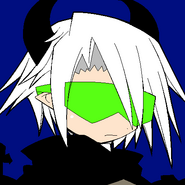 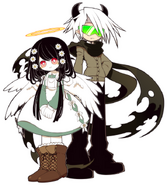 Daimonji
Add a photo to this gallery

There are currently no known quotes from Daimonji.

Retrieved from "https://okegom.fandom.com/wiki/Daimonji?oldid=56056"
Community content is available under CC-BY-SA unless otherwise noted.